Figuring out what is the best antifreeze for your car is not the simple task it once was. Way back when, all antifreeze was green, and you simply mixed it to a 50/50 ratio with water.

Modern antifreeze can include any number of additives, some of which may be harmful to some vehicles’ cooling systems. Let’s look at what separates the different antifreeze options and see if we can find the best antifreeze for your car.

The Best Antifreeze For Your Car 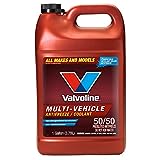 It makes several types of antifreeze for different applications, but its G-05 product is a favorite among Ford and Chrysler drivers.

Its additive package also makes it suitable for many models of Mercedes-Benz.

It is low-silicate and phosphate-free, so it will not work for most Japanese vehicles. For its specified applications, however, Zerex G-05 is an excellent HOAT product that provides long life and superior protection against corrosion.

Prestone has a long history in the antifreeze business, so much so that it is synonymous with coolant to a lot of drivers, many of whom consider it the best antifreeze coolant brand.

Its antifreeze is meant for universal applications, so it should work for you no matter what you drive.

That said, it lacks the phosphate additives some Japanese makes suggest, as well as the silicates some European manufacturers call for.

It makes up for those missing ingredients with a corrosion protection package that is compatible with any metal in any cooling system.

It contains a unique additive package that allows it to be used to top off silicate-containing coolants as well as those without silicates.

It is ethylene glycol-based, so it may not be compatible with propylene glycol antifreezes. This antifreeze is still effective at a 40-percent concentration (60 percent water), so emergency top-offs with water are allowable.

If you drive a high-performance vehicle like a motorcycle or a sports car, you owe it to yourself to give Engine Ice a spin. This phosphate-free antifreeze uses a propylene glycol base. Biodegradability is a requirement on most race tracks, and this product satisfies that rule.

Engine Ice is a proven performer, and it allows high-performance vehicles to run noticeably cooler throughout the RPM range. However, it may not provide spectacular results for passenger vehicles. Check out this YouTube video for a motocross testimonial.

If you own a late-model Audi, Volkswagen or Porsche, you may have noticed that your coolant is an odd yet attractive violet color.

This HOAT coolant uses an ethylene glycol base with a silicate additive package.

Those manufacturers produce their own antifreeze, but Pentosin’s Pentofrost E is the same thing at a more affordable price point.

Whether the OEM antifreeze is required is debatable, but Pentofrost E can be added to any of them as a filler with no ill effects.

The terms antifreeze and coolant are used interchangeably in car circles, but they are not exactly the same thing.

A coolant could be any liquid that runs through your vehicle’s cooling system. That liquid passes through the engine block, where it transfers heat from the engine’s parts and moves it to the atmosphere.

Engines run best when they run hot, though, meaning pure water would boil away at the temperatures experienced inside an engine. Worse still, water has the peculiar and frustrating tendency to expand as it freezes.

If the fluid inside an engine freezes, the resulting expansion can cause the engine block to crack, ruining the motor.

To combat this effect, we combine a chemical antifreeze with water. The resulting mixture’s freezing point can be reduced by 50 degrees Fahrenheit (10 degrees Celsius) or more.

Modern cooling systems run at an average of 15 psi, which is enough to raise the boiling point of the pressurized coolant an additional 45 degrees Fahrenheit (7 degrees Celsius).

The first antifreeze additive developed for use in vehicles was methanol.

However, methanol is too reactive with the different metals found in modern cooling systems. It causes corrosion that drastically shortens the lives of radiators, water pumps and other critical components.

This is the classic green-colored antifreeze that most of us are familiar with.

In general, this antifreeze contains phosphates and silicates as proprietary additive packages, which form a protective barrier to protect metals from the corrosive properties of the antifreeze as it degrades.

The formation of that barrier is constant, but the barrier itself can flake off, leaving exposed metal and producing abrasive particles in the coolant.

These IAT coolants should be swapped out every two to three years. Higher operating temperatures and mileage can shorten coolant life. The main ingredient that prevents freezing in IAT antifreeze is glycol – in either one of two forms.

Ethylene glycol has been used in antifreeze solutions since the 1920s. In its pure form, ethylene glycol freezes near 10 degrees Fahrenheit (-12 degrees Celsius), but mixing it with water reduces that freezing temperature by more than 30 degrees.

That broad temperature range allows engines to operate safely in a broad array of temperatures and conditions. Unfortunately, ethylene glycol is also toxic when ingested, which is made more likely because of its sweet smell and taste.

Also, propylene glycol exhibits similar temperature tolerances as ethylene glycol, so its only real advantage is its reduced toxicity.

As such, it is allowed as a racing coolant on some closed race tracks, though certainly not all of them.

A newer, more high-tech antifreeze is known as OAT. It still contains glycol, but the additives are organic acids. These acids form a layer on the metal surfaces of the cooling system, but it does not continuously build up like IAT additives do.

When it flakes off, a new layer forms on the bare metal, significantly increasing coolant lifespan. The first OAT coolant was GM’s Dex-Cool, which the company released in the mid 1990s.

It was meant to be an extended-life coolant, good for 5 years or 150,000 miles. There was some controversy involving Dex-Cool and GM intake manifold gaskets, but that didn’t stop other manufacturers from seeing the benefits of long-lived antifreeze.

These newest of coolants utilize organic acid technology with the addition of inorganic nitrates.

These coolants offer quite specific anti-corrosion packages, some of which are prescribed or prohibited by certain manufacturers.

This is why it is important to refer to your owner’s manual for the correct antifreeze for your car. When it doubt, flush it out and fill the cooling system with the recommended fluid.

The Rainbow of Colors and Additives

The color of the coolant in your vehicle hints at its contents, but it is only a hint (follow this link for a chart of antifreeze colors).

Remember that the additive package in one antifreeze may not work for every vehicle, due to the inclusions of different metals and the possibility of reaction.

If you’re unsure of the antifreeze in your vehicle, flush it and start over with the manufacturer’s recommended fluid.

Manufacturers went down a rabbit hole in the early part of this century, creating antifreeze niches where none needed to exist.

In truth, there is no benefit to the auto companies’ required additive packages that modern chemistry cannot solve. That is what makes Valvoline Maxlife the best auto antifreeze.

It lasts as long as any other antifreeze, works as well or better than most, and protects any metal in any cooling system.

One final word about choosing the best antifreeze for your vehicle and whether it affects your warranty.

In the U.S., there is never a requirement for a consumer to use a specified product to keep their warranty intact, unless the warrantor provides that product and the labor to replace it free of charge.

The Magnusson-Moss Warranty Act places the burden on the manufacturer to prove that routine maintenance, including fluid swaps, caused any damages. Therefore, switching to a universal antifreeze such as Valvoline Maxlife cannot affect your warranty in any way. 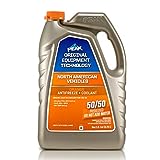 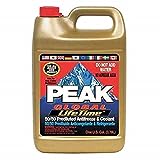