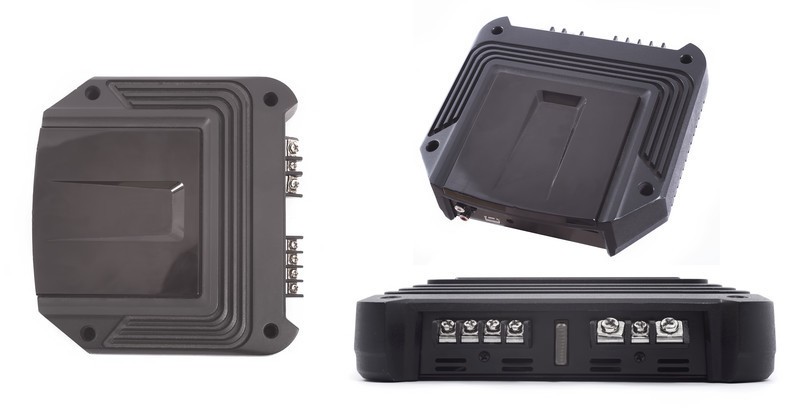 Adding an amplifier to a car audio system is not only about producing louder volumes, though it will certainly do that. Amplification of audio signals increases their dynamic range and will bring out musical details that cannot be heard without it. The best car amplifier will produce deep bass and crystal-clear highs, even at louder volumes.

Searching for the best amplifier for car applications can feel like wandering in a forest of technobabble. It can be intimidating to even start down the path through the wilderness, but it doesn’t have to be as complicated as it first appears. You really only need to know a few key details to choose the best car amplifier for your vehicle.

Amplifiers take the signal from your stereo and increase it before sending it to your speakers. It’s a simple task, but it is one that must be done correctly. Otherwise, you can damage the amp, speakers or both. You will need to know and match two numbers between the speakers and amplifiers: impedance and power handling.

Impedance, measured in ohms, is resistance to the flow of electricity. The higher this number is, the lower the number of watts that can travel along the circuit. Multi-channel car amplifiers can typically drive 4-ohm loads. Many amps can be wired to operate at 2 ohms, while some can handle 1-ohm loads.

A typical analogy for understanding impedance is to compare the water flow through two hoses of different widths. The higher the number of ohms, the thinner the hose and the less water that can make it through in a given time. So at 4 ohms, an amplifier will put out less power than it would at 2 ohms.

It is imperative that the speakers and the amplifier pushing them use matching impedance ratings. A lack of resistance can overwork an amplifier, resulting in heat buildup and possible damage. However, the amp’s ohm rating is a minimum value. It can safely drive speakers with higher impedance ratings.

Speakers also need to handle the power the amp is delivering. The amp’s power output is given in watts, and this number should meet or exceed the speakers’ capability. Any extra power above a speaker’s maximum rating is called headroom, and it prevents distortion at louder volumes.

Disregard manufacturers’ claims of peak output when comparing amps. The term for the actual output of the amplifier is RMS (root mean square). This number may be as little as half the peak output, but it is the power you can realistically expect the amplifier to achieve.

Each channel can power multiple speakers wired either in series (positive terminal to negative terminal) or in parallel (positive to positive). When wired in a series, the impedance of each speaker adds up to a total. So two 4-ohm speakers will achieve an 8-ohm total impedance.

Wiring speakers in parallel has opposite effect. In this case, two 4-ohm speakers will have a 2-ohm total impedance. When wired either in parallel or series, the channel’s wattage is divided by the speakers. So two speakers on a 100-watt channel will receive 50 watts each.

Most car amplifiers need to be wired directly to the car’s battery. Usually there will need to be a fuse wired in-line for safety. Because each manufacturer has its own specifications, follow installation instructions provided with your amplifier carefully.

Manufacturers group amplifiers into classes based on how they are wired and the design of their circuits. Some classes are proprietary to certain manufacturers, but most car amplifiers are either Class A/B or Class D. Here are the distinctions:

Class A – Produces high-fidelity sound, but has a constant flow of electricity through transistors. This means a lot of heat builds up, even when no signal is present.

Class B – Transistors shut down half the time. They run cooler than Class A, but produce more signal distortion because of the constant switching.

Class A/B – Most common for multichannel car amplifiers. Intended for mid- and high-range speakers. The flow of current through transistors is constant, but reduces when there is no signal. These amps run cool like Class B amps but have nearly the fidelity of Class A.

Class D – Transistors switch on and off multiple times per signal cycle. Runs very cool with a lower draw than other classes. Produces more distortion at higher frequencies. Ideal for the higher draw and power demands of subwoofers. Most monoblock amps are Class D.

This Class-D monoblock amp comes from one of the best car amplifier brands, and it provides some serious punch. An infrasonic filter scrubs low-frequency sounds beyond hearing range, saving speakers from damage. A Butterworth crossover cleans up the sound, helping it deliver some of the clearest bass of any entry-level amp.

This amp is 85-percent efficient at 2- and 4-ohm capacities, with an average draw of only 55 amps. It has an RCA passthrough to allow easy connection of a second, 4-channel amplifier to push your remaining speakers. Most importantly, this amp delivers RMS power of up to 1200 watts, depending on speaker impedance.

Rockford Fosgate has been a respected name in car audio since the 1980s. The Prime is its entry-level line, but that is relative for such a trusted brand. This amp is a beast, pure and simple.

Best Car Amplifier for the Money

Producing impressive power for a fraction of its competitors’ prices, Boss Audio’s Riot. Stable at 2-ohm impedance, these amps put out enough power for most smaller subwoofers. They can be connected to factory or aftermarket receivers, and they offer control over bass reproduction via bass shaping and level controls.

Unfortunately, Boss does amp up the hype on power production. Claims of up to 3400 watts (depending on model) are exaggerated, but actual RMS numbers are respectable – if difficult to ascertain. At 2-ohm stability, giving 1-ohm peak values is misleading. The 2000-watt model delivers closer to 750 watts RMS at 4 ohms, which is still respectable.

Boss Audio is a well-known player in the affordable car audio market. Like others in this niche, it takes its marketing to extremes. Still, it makes quality products. Just take its claims with a pinch of salt.

Another in the que of affordable amplifiers, Planet Audio’s Anarchy series are all two-channel, bridgeable amps. They have variable input controls to allow connection either directly to a car stereo or piggybacked onto the factory speaker wires. Class A/B circuitry is spot on for the purpose, and there is onboard bass-boost and a subwoofer remote for when the outputs are bridged to mono.

Now for the reality check. These amps provide a lot of bang for the buck, but even the claimed RMS numbers should realistically be halved. This video proves the point, with a dyno test of a Planet Audio amp. But, as the tester points out, the actual output is impressive for the price. Just don’t purchase one to push an amp rated at the claimed RMS output. Assume half the claimed power.

Planet Audio is a relative newcomer. It competes with brands like Boss, and tries to do so by out-claiming them. There is no need for hyperbole, though. This amp does a fine job. It might garner more respect with more honest output claims.

The four-channel Punch series from Rockford Fosgate powers smaller stereo speakers with impressive clarity. It offers versatility in bridging options to allow for a growing system. It has an onboard EQ and RCA pass through for use with a monoblock amp. Heat dissipates evenly across the aluminum heat sink, and patented C.L.E.A.N. circuit matches the source signal to the amp for improved reproduction.

Rockford Fosgate has no need to conflate its output numbers. This is a trusted series from a trusted brand. A rating of 150 watts at 2 ohms per channel might not sound impressive, but it is plenty for door speakers. The channels can be bridged if more power is required, but this is not a sub amp.

Another in the line of sought-after products from a beloved brand, Rockford Fosgate’s Punch line has earned its stellar reputation. This is a versatile amp that can power-up a sagging factory sound system as well as it can be the foundation of a complete audio overhaul.

Kenwood’s miniature amplifiers produce big wattages from small packages. Each channel on the KAC-M3004 produces a claimed 50 watts at 4 ohms 75 watts at 2 ohms per channel. This little guy can easily power four midsized speakers. With variable low- and high-pass filtering, the signal can be tailored to your needs. And it can handle speaker-level input signals.

Anyone worried about the draw of an amplifier on their electrical system should consider this little Kenwood an option. It draws a miniscule 22 amps of power. This may be the best compact car amplifier ( or motorcycle amplifier) available. In fact, Kenwood actually underrates these mini amps. It does have Class D circuitry, but the M3001 monoblock is better for small subs.

Kenwood makes some of the most booming amps on the market, so it may surprise that its mini amp makes this list. The power this little guy puts out belies its diminutive size, though. With a small draw and a big hit, this amp deserves consideration from car and powersports owners alike.

There are as many amps on the market as there are applications for them to fulfill. Our winner for best car amplifier is Rockford Fosgate’s Punch series. Regardless of your needs, there is a Punch for you. It is configurable for many different applications (mono or multichannel), and it produces its claimed RMS power so there is no guesswork. One of the other amps on this list may solve your needs better, but the Punch series solves the most car audio needs.

Choosing the Best Car Wax on the Market